Post-script - Recently, I had given my opinion on dance education to Ranjana Dave who was writing an article for the Asian Age. When she approached me about the issue of education in schools, I had a lot to say. Of course, not everything could be incorporated into the article, but here's what I had to say (in full) - its a hurried ramble, unorganised even...but its...raw and real :)

-------
When I was a student, learning dance in school was not even an option. I had heard that some schools offered dance as an extra-curricular activity, but it was in no way part of the curriculum. Though the condition of any kind of art education in schools was pretty dismal and disorganised, dance ranked well below music or theatre in priority. At school, we had compulsory music lessons until senior school, we had a school choir that anyone with a good voice could join and the music at school was of pretty high quality (kudos to the music teachers at school). But us dancers learnt dance outside of school. This was not a bad thing at all, but we were the privileged ones who could afford to learn dance. All the other students were denied this knowledge simply because it wasn't available for learning at school.
More than seven years have passed since I graduated from school, and over the years, I heard that dance had continued to be taught - sporadically, if at all - at the level of an extra-curricular activity. This basically means its optional, even if its offered at school. Sometimes outsiders are hired when a cultural programme is organised by the school, but dance is not something students are exposed to everyday. But recently, the education boards have expressed a desire to make dance a compulsary part of the curriculum. 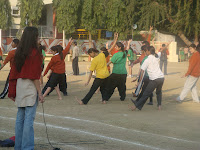 My stint with dance teaching started when I was hired as a resource person by Sardar Patel Vidyalaya (SPV) in December 2010 to teach and choreograph a dance piece for their annual 'activity week'. A few fellow dancers and I had been talking about dance education in India and what changes we would like to see. When SPV asked me to join them as a dance teacher, I didn't hesitate to accept. I designed the same dance programme in some schools in Bangalore, where it was received with tremendous enthusiasm and good-will.
My dance curriculum was designed to introduce, at a very basic level, as many aspects of dance education as possible. At the school level, I merely wished to allude to the various possibilities for students interested in dance. The dance course included introductory practical dancing of various forms, but also learning how to appreciate and critique dance (this would definitely help them to be a better audience, if not better dancers). I had proposed to have them graduate from school with some knowledge about more than one dance form (from more than one part of the world, but definitely one Indian form). I also wanted my students to have learnt about the theoretical, social, political, historical, and scientific aspects of dance. I also wanted to introduce them to the possibility of dance writing and criticism. I wanted them to leave school knowing that dance has a lot more potential than they were perhaps led to believe, and learning about dance provides them with a lot more opportunities than they might think. 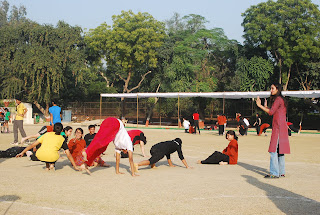 The curriculum is ready to be implemented, but I have not had a chance to put my curriculum to the test. The first hurdle, I think, comes here - yes, we've been directed to make dance compulsory. But how many schools have seriously implemented that? I'm not making an informed judgment here, but I doubt if many schools have done this. Dance is still something to be done 'on the side'. And for some reason, it seems to have the least importance in schools even within the arts - most schools have music class, art class, and even theatre class. But finding a dance class in a school is quite rare. I don't see it seriously becoming a part of the curriculum anytime soon. With added pressure on exams and studies, and students and their parents destroying the peace and happiness of their homes over a few marks and grades, I see dance being perceived as something that might be a nice addition to 'serious' learning, but really - utterly unneccessary. It's sad, really. Because I feel that students and their parents are failing to see the dangers and risks of an unbalanced education. There's so much emphasis on high grades, as if a child's development depends entirely on how high he or she scores in exams. All other skills are less important. That kind of pressure might just be why we have little boys and girls taking extreme measures every once in a while. It's also surprising that dance is considered so utterly unneccessary, because we as a people, love to dance at every occasion - be it a wedding, a birth in the family, celebration of good grades, a festival, some regions even dance at a death ritual...but we don't think it important enough to include it in the education system of our children.
Second hurdle - even if dance is introduced into the curriculum (in the way I want it to be - practice, theory, dance history, dance politics, dance criticism, multidisciplinarity, critical questioning involved), what happens to the student when he or she leaves school with this knowledge? Where are the colleges that will train them further? Apart from a thimble-full of 'dance education' centres, where do these students go? Which covetted mainstream undergraduate college offers a BA in Dance? Which journalism school offers a course on dance criticism? If you want to learn anything about dance, you have to go to a specific 'dance' place, where you're cut off from all other disciplines. And even there, I think students are mainly trained to be performers.
Having said all this, I think there is some hope. Some friends and fellow dancers in Bangalore are seriously examining dance education in schools and I am glad to say that I am getting involved with that. But one thing's certain - it'll take more than just an education board's directive to get dance into the curriculum. It requires a shift in attitude all over - maybe even in current teachers of dance. But certainly in the attitude of school boards, school teachers, the students and definitely, the parents themselves.
Posted by aranyani at 10:42 PM