The Hindu/ Footloose/ Drawing the Line

There was a time when ‘Indian dance’ was synonymous with ‘solo’ performances. With classical dance branching out into group choreography, and with the advent of ‘Indian contemporary dance’, this is no longer the case. In both the classical and contemporary dance scenarios in India, dance troupes and companies are coming into being and expanding; and far less frequently, but silently coming into existence – are egalitarian and democratic artistic collaborations.

Every young dancer who steps into the professional realm of collaborative dance – whether it is joining a dance company where there is quite a gap, hierarchically, between the artistic director and dancer; or if it is doing a project with other artists as ‘equals’ –is faced with the question of where to draw the line.

Before I explain what I mean to say by ‘drawing the line’, I must confess that I do not have the answers to the questions I invoke in this essay. I do not claim to know where to draw the line. But given how several young dancers give up on their aesthetic beliefs and values without blinking, naively believing that agreeing to do anything and everything asked of them makes them ‘open minded’, I thought the question of where to draw the line is worthy of being thrown out in the open.

Let me try and explain what I mean when I talk about ‘drawing the line’. Ideally, a great dancer, after years of rigorous training, develops his or her personal aesthetic and style. Whether he or she remains profusely loyal to a technique, or decides to rebel against it – a dancer becomes known for his or her individualism within the generic ‘style’ or ‘form’ of dance. Therein, at least I believe so, lies the excitement and uniqueness. But therein also lies the complication during collaborations with regard to the question of ‘drawing the line’.

When two or more artists with their individual artistic convictions and aesthetic perceptions enter a common space, there is often a clash of individual identities in the form of aesthetic and artistic disagreements. In an egalitarian collaboration, whose individual vision will prevail and who compromises depends on how the artists negotiate their creative terms. The artists, together in a democratic space, may be able to work out to what extent they are willing to compromise on their aesthetic values before they draw the line. 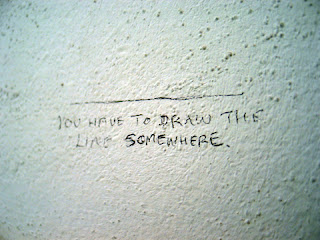 But what happens in a situation where a young dancer is working under a well-known choreographer, or a young student joins his or her teacher’s dance troupe/company? In other words, what happens when the situation is not equal? When hierarchically, the artists in question are not on the same ‘level’? Does the willingness of a dancer to work under unequal conditions imply a willingness to compromise on artistic values?

It is a well-argued and justified defense that a dancer has the choice to work with one choreographer and not another. On researching the two choreographers, a dancer can make an informed guess at which choreographer is less likely to clash with his or her aesthetic choices. But hypothetically, if a dancer finds himself or herself in a situation where he or she is being forced to dance in a manner that clashes with their artistic and aesthetic values, where can a dancer draw the line? Has a dancer been able to draw the line? Or has the answer so far lied in the extremes – silently compromise whatever needs to be compromised or be forced to abandon the collaboration?
Posted by aranyani at 4:09 PM No comments:


Recently, there has been some talk amongst the Indian rock and metal crowd about musicians having to ‘pay to play’. This means that instead of artists getting remuneration for performing, they pay a fee to enter the festival as performers. Some musicians have been voicing concerns about it, calling it a dangerous trend. Others nonchalantly stated that this has been the case in a lot of music festivals the world over for many years. None the less, it reminded me of the similar situation that exists in the dance world in India.

Certain festivals or platforms for dance in India have been following this system for several years. It is said that many artists pay large sums to be able to perform in these prestigious festivals. Other festivals may not have this policy of paying to perform, but they offer such inadequate remuneration that an artist does end up ‘paying to play’ in some form or another.

As was the case with the music crowd, dancers are also divided in their opinions about having to pay to perform. Some are vociferously fighting the trend, while others have resigned to adopting the same nonchalance expressed by some in the music world.

As a dancer and a writer, I am entitled to my opinion about this system of paying to perform, but more illuminating than my opinion was an analysis of what happens to art when this system is applied to it. This is not to trivialize what it does to artists – such as the fact that the pockets of artists are hemorrhaging money every time they want to showcase their work, and that artists cannot give their full attention to their art because they must have a steady job to pay the bills - but I have written about this in an earlier article on performance ethics.

The ‘pay to play’ syndrome does contribute to the above mentioned issues for artists, but it also highlights a very specific reality.  In this scenario, there is no room for artists who are gifted and talented, but cannot afford to pay. It forces art into the hands of the relatively more affluent, and snatches it away from the less affluent and the poor.

And yet, rather paradoxically, throughout history and in literature, art has belonged in the realm of the common man, not the elite. Sure, the people that patronized the arts have been royalty and the affluent but the artists and practitioners have not. The devadasis in India were wealthy by patronage, but they certainly did not come from affluent backgrounds. The famous painter and sculptor, Michaelangelo also lived the life of a common man. The birth of jazz and the blues, was amidst poverty. And our very own M.F.Husain walked all over Bombay barefoot, paintbrush in hand, painting billboards.

My intention is not to romanticize the poverty of artists, or to say that artists have always been and will always be poor. That certainly should not be the case. Every artist hopes that he or she will be able to survive and thrive through their art. However, art is not something that can or should be taken away from the common man or the poor.

This syndrome almost declares art to be something like a luxury that only the affluent elite can afford to practice. If an artist cannot pay out of his or her own pocket, they don’t get to show their work. The ‘pay to perform’ scenario is as bluntly simple as that. If you don’t have substantial amounts of money that you can spare every time you want to show your work, then you simply don’t show your work. Then, is the message that is being sent out by the syndrome this – pick up a paintbrush, a musical instrument or a set of ghungroos only if you are wealthy? That, in turn, begs for introspection about a crucial question – is the practice and performance of art only for the affluent, or is it for everyone?

Posted by aranyani at 4:08 PM No comments: