The Hindu/Footloose/ Speaking of Shiva

During Mahashivaratri this year, social networking websites were flooded with dancers hailing it as the day for dancers. This celebratory mood was understandable. According to myth, Shiva is the cosmic dancer. However, in order to explore whether Shiva has always been at the pinnacle of importance in dance, it is interesting to trace Nataraja's history in that context.
Nataraja has played an important role in the South Indian religious tradition for centuries. He is seen in stone sculptures of Badami, and the beautiful bronze sculpture of Nataraja of the Chola era is famous today. Yet, according to Matthew Harp Allen, “Nataraja had never before been asked to play a role quite like the one reserved for him in the 20-century revival”, when Nataraja was accorded a central role. 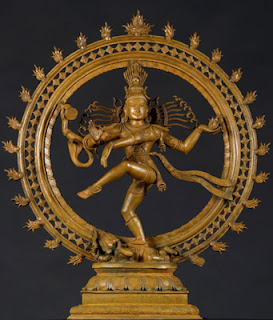 In the performances of the Devadasis before the 1930s, Shiva in the form of ‘Nataraja’ was not the primary subject or deity of dance. Records suggest that in the early part of the century, dance was more concerned with sringhara prabandhas – songs involving aspects of romantic love. These were songs taken from Jayadeva’s 12th century Sanskrit text Geeta Govinda and other compositions written
between the 17th and 19th centuries. The protagonists of these stories were Krishna or Murugan - two youthful, playful and romantic characters in Hindu mythology. On the other hand, Shiva is generally considered to be more severe than Krishna or Murugan, according to Kalanidhi Narayan. Shiva’s dance, for many, represented the cosmic destruction of all impurities.
There is only one set of poems that paint Nataraja as a lover. These originated in Chidambaram and, according to Allen, were written in light of Shiva being the local, neighbourhood god, and not a “transcendent cosmic deity”. Other poems of the Devadasi era that mention Shiva neither cast him as a cosmic dancer, nor as a lover. These poems come under the genre of ninda stuti. Here, the god is teased by the devotee. In an 18th century Tamil composition, the poet mocks Shiva, saying “You always have one leg raised; Why such lameness, Lord?” The poem goes on to say, ‘That time you kicked Yama, the god of death…did you sprain your leg and have to raise it, limping?’
As Allen points out, it was during the ‘revival’ of dance in the 1930s that Nataraja becomes “both a patron deity for dance and a subject for portrayal in dance”. After dance moved out of temples, the Nataraja idol, over all other gods, began to be placed in the corner of the stage. Additionally, the number of compositions dedicated to and about Nataraja increased radically during the period of this ‘revival’. Old poems about Shiva and Nataraja that were previously performed as vocal recitals were brought into the realm of dance by choreographers in the 1930s and 40s. In fact, according to some, it is during this time, that ‘Natanam Adi Nar’, a currently celebrated kirtanam dedicated to Nataraja, became popular. It is said that Rukmini Devi always ended her recitals with ‘Natanam...’. Equally important in making Nataraja a central figure in Dance was Ananda Coomaraswamy, who wrote ‘The Dance of Shiva’. According to Allen, it has been the most influential publication in the 20th century popularization of Nataraja.
Nataraja continues to be popular in the 21st century and stands today as an extremely important figure in the world of Indian dance, but clearly this was not always so. In fact, if Indian dance forms have existed at least since the first mention of Devadasis (around the 11th century) then Nataraja’s importance and centrality is incredibly recent. In that light, is it entirely appropriate to call Mahashivaratri the day for dancers in India? Indeed, can and should dance belong to any one particular god?
Posted by aranyani at 10:08 AM