Choreography of Group work - My talk at RASA Seminar, Narada Gana Sabha, 14 May 2017

The call for papers for this seminar asked either gurus or young dancers to share their experiences of choreographing or participating in group work. In a manner of speaking, I am neither. Now in my early thirties and having performed professionally for over fifteen years, I probably do not classify as a ‘young’ dancer. I am not a ‘guru’ or tremendously experienced choreographer either, having seriously ventured into the world of teaching and choreography only half a decade ago. Instead, I present to you a perspective of a young choreographer of group work. My dance company, Vyuti, has been in existence since 2013-14, and started performing only a little over a year ago.

While contemplating the content of this essay, I came to realise that in my short but illuminating experience with choreographing group work, both challenges and strengths have been of two kinds - creative and practical. 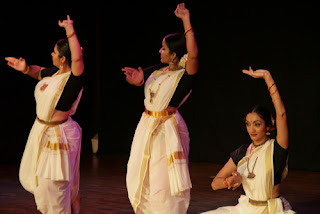 When I was faced with the task of conceiving a group in 2013, the challenges emerged almost instantly - choreographing group work in a way that hadn’t already been explored was one such creative challenge. Although Bharatanatyam has largely been a solo dance form, the last two decades have seen a lot of group work emerging. That is a lot of years of work by many well known and experienced dancers and gurus! So my first challenge became to gain clarity on what I wanted to achieve through my group work and how it differs from the already existing body of group choreography in classical dance.

It became clear that I wanted to examine traditional pieces from the margam, through multiple interweaving bodies. Investigating the idea of interaction between multiple dancing bodies, through eye contact and physical touch, I wanted to explore how solo traditional pieces transform when conceived as an interactive group form. How an alarippu, for instance, done by three interconnected dancers instead of one, would transform the piece. And indeed, what it would do to the dancers! I knew this was a different exploration than the kind done in at least some of the other group work that had emerged in classical dance - whether traditional dance-dramas or thematic group choreographies. I conducted similar investigations into the formats of a jatiswaram and tillana, and am now working on a varnam. 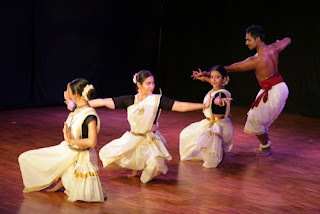 One of the dangers of investigating newer ways to engage with classical dance techniques is that it sometimes requires ‘manipulations’. Its important to know that changing something that is so inherently logical and sensible like an adavu runs the risk of disrupting that logic and sensibility. The ‘manipulations’ one introduces then, must compensate for this loss by introducing something new but more importantly - organic to the form. As a group choreographer, an important challenge was to create these new innovations without compromising the existing form.

Practical challenges were equally overwhelming. I did not have a strong group of adult students whom I had had the opportunity to train over several years. I’ve only been teaching for a few years, and most of my students are children. I had to seek out dancers I had not personally trained, but had the potential to adapt well to Vyuti’s vocabulary. Not being their “guru” and sometimes working with dancers my own age or even older, some of my dancers have, on occasion, faced challenges with regard to my authority as Artistic Director, but these were quickly overcome. Keeping a steady group of permanent dancers has been a struggle because I cannot pay them enough to demand their full time commitment. This lack of permanence of dancers is partially linked to another challenge - that of funding. Without financial support from governments or cultural bodies, Vyuti has been entirely self-funded and self-built. This is not an easy task for anyone who’s primary income comes from teaching dance and performing! Juggling between teaching and managing my own solo work, along with trying to do managerial work (that included negotiating with organisers of festivals, juggling all the dancers’ schedules for rehearsals, finding rehearsal spaces and funds etc...thankfully I have an efficient and positive manager now) choreographing and dancing for Vyuti has been one of my biggest practical challenges as a young group choreographer.

But I cannot deny that choreographing group work has its creative and practical strengths too. And I came to recognise this as quickly as I did the challenges. Creatively, one of the biggest strengths I drew from group choreography was consciously building a collaborative atmosphere that allowed for some creative input from my dancers. To be able to openly and without judgement, discuss and physically engage with my ideas in a safe environment led to various unexpected moments in Vyuti that even I didn’t anticipate would enter Vyuti’s repertoire. Engaging with group work also gave me an opportunity to discover that multiple bodies offer multiple possibilities, not more than but differently from the way working with a solo body does. 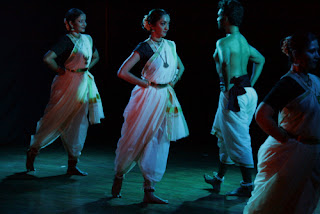 Finally, leading a group made me realise that working together consistently instills a sense of family. At least that’s what happened with the dancers who haven’t come and gone, but have stayed with Vyuti - we are fiercely loyal to each other and the work, creating a sense of solidarity and togetherness that is, for obvious reasons, missing in solo work. The dancers have been invested in Vyuti, not just in terms of dancing, but in other ways - they’ve felt strongly about the concepts and ideas I’ve engaged with, the music I have used and even the way the costumes are tied. The dancers, protectively looking out for the future of Vyuti, continue to provide information, whenever they get wind of it, regarding platforms where Vyuti can get performance opportunities and visibility. It was two of my Vyuti dancers who brought my attention to this seminar and urged me to write this essay. Vyuti, in many ways, is now a collective vision - with multiple brains working on how to take it forward, instead of just one! That is an enormous strength, in my view. And one I am deeply thankful for.


To conclude, as a young choreographer, conceptualising and creating a group has had its fair share of challenges - both creatively and on a practical level. The challenges have tested me, and sometimes my patience and peace of mind. They have also strengthened me. In my view, if the group functions open-mindedly, the leader of the group and dancers have mutual respect for one another and everyone is deeply invested in the work collectively, the strengths of choreographing group work can eventually overcome the challenges.